ARFD member: Politics is not a Club of Cheerful and Sharp-Witted to demand prompt responses to statements 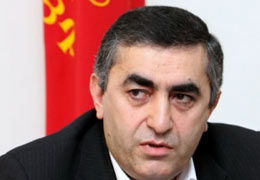 Azerbaijan will put difficulties in the way of Armenia's accession to the Eurasian Economic Union because it is outside these processes, Head of ARF Dashnaktsutyun Faction Armen Rustamyan told journalists on Friday when commenting on Kazakh President Nursultan Nazarbayev's statement on the need to establish a customs point on the Armenian- Artsakh border.

Rustamyan thinks that Nazarbayev did not speak on his own behalf. He spoke as a mediator, he simply read out the Azeri president's letter. Rustamyan added that he was not surprised at Nazarbayev's statement because Kazakhstan has defended the interests of Azerbaijan and Turkey from the very beginning. "The more they speak of Armenia's full membership, the sharper these issues become, as Azerbaijan himself is outside these processes and it will do its best to prevent Armenia from joining the Union and strengthening its positions>, he said.

He added that Armenian President Serzh Sargsyan will have an opportunity to respond to the President of Kazakhstan. He does not have to respond at once. "Politics is not a Club of Cheerful and Sharp- Witted to demand prompt responses to statements", he said.

To note, at the May 29 meeting of the Supreme Eurasian Economic Council, Serzh Sargsyan expressed Armenia's willingness to sign the document on accession to the Eurasian Economic Union on June 15.  Russian President Vladimir Putin said that this will be possible no earlier than July 1, because Armenia should carry out some obligations. Kazakh President Nazarbayev, in turn, said Azerbaijan claims that Armenia can join the Eurasian Economic Union within the same borders it joined the World Trade Organization (WTO). "We have received the Azerbaijani president's letter saying that Armenia joined WTO with a reservation that the provisions must apply to the territory of Armenia within its international borders recognized by the UN. It is an issue for discussion," he said. The President of Armenia has not responded to this statement yet.