Ilham Aliyev: Karabakh conflict settlement is only possible on the basis of territorial integrity 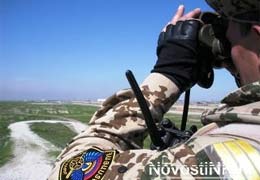 The Karabakh conflict settlement is only possible on the basis of territorial integrity, Azerbaijani President Ilham Aliyev said during the opening of II World Forum on
Intercultural Dialogue, which is underway in Baku under the slogan "Living Together Peacefully in a Diverse World".

He thinks that the settlement of the conflict will bring peace to the region. Aliyev said that Azerbaijan should restore its "territorial integrity".

He said that Azerbaijan has allegedly faced a humanitarian catastrophe for 20 years. The official website of the Azeri President quotes Aliyev as saying: "For 20 years, the internationally recognized ancestral lands of Azerbaijan in Nagorno-Karabakh and surrounding seven districts have been under Armenian occupation.
This occupation continues. Azerbaijanis have been subjected to a policy of ethnic cleansing. All the Azerbaijanis have been driven out of Nagorno-Karabakh and surrounding districts.

Twenty years ago the UN Security Council passed four resolutions on an unconditional withdrawal of the Armenian forces from the occupied Azerbaijani lands. None of them has been executed. All the other reputable international organizations, such as the Council of Europe, the European Parliament, the Organization of Islamic Cooperation, NATO, etc., have also adopted similar resolutions. Azerbaijan's territorial integrity is recognized by the international community".