Armen Ashotyan: We want to build in Armenia a European state based in Eurasian space 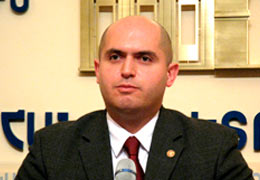 We want to build in Armenia a European state based in the Eurasian space, Armenia's Education and Science Minister Armen Ashotyan said during a Eurasian economic integration forum in Kazan.

"Despite the geo-political confrontation between the European Union and the Eurasian community, globally they are situated in one and the same area. Armenia is not going to give up on the Eurasian values because it has contributed to them for centuries. Today we have more Europe in Armenia than we had some five years ago. We hope that after Sept 3 we will have Eurasia as well," Ashotyan said.

Concerning the membership to the Customs Union, he said that Armenia will give the Union access to the Middle East, Iran and the huge Armenian Diaspora worldwide.

The Kazan forum has been organized by the Federal Agency for the Commonwealth of Independent States, Compatriots Living Abroad and International Humanitarian Cooperation (Rossotrudnichestvo) and is connected through video link with Yerevan, Beijing, Moscow, St.Petersburg, Minsk, Astana, Brussels and Kyivю