"Heritage": If the opposition consolidates in 2014, revolution will be unavoidable 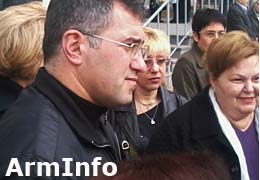 If the opposition consolidates in 2014, revolution will be unavoidable in Armenia, deputy chairman of the "Heritage" party, Armen Martirosyan, made such a prediction at today's press-conference.

He said that regime change from top to down under the support of civil society and political forces is the only way of development of the country. He emphasized that the Armenian society already demand getting rid of the ruling Republican Party of Armenia and the government.

He also added that the only weapon of the incumbent authorities in 2013 were batons of policemen, but the latter do not want any more to be under their robbing regime. "In case of civil activeness, they will throw their shoulder loops  and join civil activists", - he said. Martirosyan thinks that political forces should put off their ambitions, stop criticizing each other and go against the regime with a single front. "Our party is ready to join the single front and our leader Raffi Hovannisian said about that for many times", - Martirosyan said.