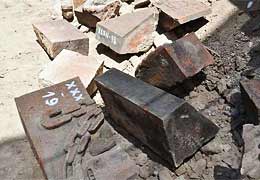 Located at 11, Terytan Street, the Afrikyan building is being dismantled to be relocated and further be restored within the frames of the Old Yerevan project. The activists have held a number of actions of protest. They think that other buildings of Yerevan will also have the fate of the Afrikyan building.
Earlier in June, architect Levon Vardanyan, author of the Old Yerevan project, said that over the past few years unknown people had stolen the cantilevered balconies, stair flights and doors of the building. He added that he had applied to the Police but that gave no result.
The Afrikyan building is a monument of republican importance. In 2004 the building was sold to a private company by the Municipality. In 2006 the Government took a decision to dismantle the building and change its location.