Armenia's Prosecutor General: Arshak Svazyan was released because he did not commit any grave crime 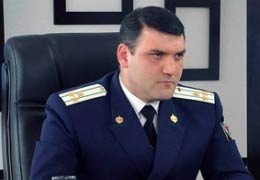 Arshak Svazyan was released in his own custody because he did not commit any grave crime, Prosecutor General of Armenia Gevork Kostanyan said on Monday.

He does not think that the beatings of MP Aram Manukyan and Nagorno-Karabakh war veterans Suren Sargsyan, Razmik Petrosyan and Manvel Yeghiazaryan were results of impunity. "These were individual deliberate crimes," Kostanyan said.

The unknown burned cars of four oppositionists lately, beaten up three Artsakh War veterans who harshly criticized the authorities, and attacked oppositionist parliamentarian Aram Manukyan and later his comrade Ashot Piliposyan. All these people claim that the authorities are behind those incidents.

On 15 December, the Police detained Arshak Svazyan (born in 1973) suspected of beating Aram Manukyan. It is widely rumored by local media outlets that Svazyan is the former driver of Arakel Movsisyan (Shmays), MP from Republican Party of Armenia.  Meanwhile, Movsisyan denies these reports and swears that he bears no relation to the attack on Manukyan.