Expert: Erdogan's "support" of the Crimea policy of Russia is conflicting with the state approach of Turkey 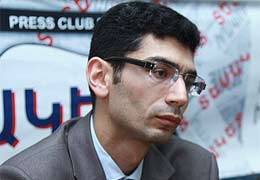 Turkish Prime Minister Receyp Erdogan's "support" of the Crimea policy of Russia has nothing in common with the state approach of Turkey, Turkologist, Artak Shakaryan, told ArmInfo correspondent.

On 2 March when commenting on Moscow's intention to bring troops into the Crimea, Turkish premier said that Moscow was right in the matter of the Crimea, as it protects its national interests.

"The statement by Erdogan is in direct conflict with the Kiev statement of Turkish Foreign Minister Ahmet Davutoglu, which did not say about observing of Russia's interests in the Crimea. So, the pro-Russian statements of the Turkish premier continue his anti-American line after the corruption scandal in Ankara on 17

December around the ruling AKP and the premier, initiated by the American secret services, as Erdogan thinks. In other words, by protection Russia Erdogan is trying to discredit the USA and Europe in general", - he said.