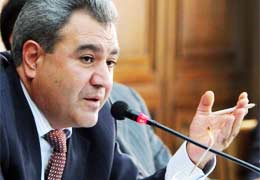 The ruling elite in Armenia is seriously displeased with Ishkhan Zakaryan, Head of Supervisory Chamber, over the Chamber's recent exposures in the activity of some government structures and fact of embezzlement of the budget funds, a local newspaper Hraparak writes.

Rumors about Zakaryan's possible dismissal are based on statements of some high-ranking officials who slam Zakaryan for excess of power. The paper writes that Zakaryan has discrepancies also with his staff that allegedly impedes inspections and leads to information leakage.

Hraparak writes that Zakaryan's only hope is President Serzh Sargsyan, who does not mind leaving Zakaryan on his position so far.

Earlier, on June 20, Prime Minister Tigran Sargsyan said in the government that the statement by Ishkhan Zakaryan, head of the Supervisory Chamber of Armenia, saying that 70% of the state budget expenditures are risky, does not correspond to reality.

"70% of the state budget is 700 bln drams. If what the Supervisory Chamber says is true, there is large- scale corruption in all the regions, which does not correspond to reality. The Supervisory Chamber is a specialized structure and has no right to make political statements. It is authorized to prepared resolutions on some issues, nothing else," the premier said.  He said that any public allegations against departments and ministers must be responded.

"I charge you to respond to allegations. You must either refute the information or assume responsibility for the violations," the prime minister told the Cabinet.