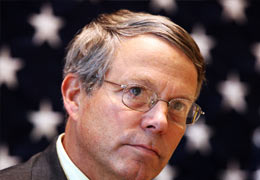 U.S.  Ambassador to Armenia John Heffern sees certain progress in the Nagorno-Karabakh peace process. The ambassador made such statement in an interview with VOA.

Earlier on 27 June, James Warlick said in an interview with VOA that it would be good if the presidents of Armenia and Azerbaijan accepted French President's invitation and attended the Paris Summit. That would allow launching constructive negotiations, he said. In this light, the U.S. diplomat said they actively work with their Russian and French colleagues. He reaffirmed the United States' commitment to the Minsk process and its readiness to assist the parties in the peace process.

As regards the sale of Russian weapons to Azerbaijan, Ambassador Heffern said he has no relevant information. He recalled that the mediators have repeatedly condemned military rhetoric, arms race and sabotage.

According to the official report of Russia to UN Register of Conventional Arms for 2013, Russia delivered to Azerbaijan 10 tanks '-90', 10 Infantry Combat Vehicles-3, 25 helicopters, and 438 artillery systems. As for Armenia, in 2013 Russia delivered to Armenia 35 tanks  '-72??, 110 Infantry combat Vehicles -2, Armoured Vehicles -80, as well as 50 ballistic missile launches and 200 ballistic missiles.