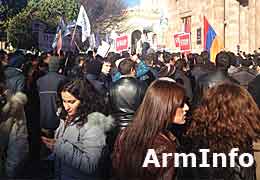 A group of activists attempted to approach Yerevan Mayor Taron Margaryan at the Christmas tree lighting ceremony in the Republic Square in Yerevan on 17 December blaming him for siphon off government funds. The activists recalled destruction of the old building of the Indoor Market and other unlawful activities in the city.

They blamed the mayor for organizing senseless events and festivities on the budget funds instead of settling the vital problems of the Yerevan citizens.
Activists were chanting "Taron - Robber!" "Shame!" but the police did not allow them to continue their protest and took two of the activists from the Square. The Police press-service told ArmInfo that administrative fine will be imposed on the given two activists. As for the mayor, he left the Square as soon as the protest started.