Viewpoint from Stepanakert: Changing of status-quo does not at all mean yielding territories to Azerbaijan 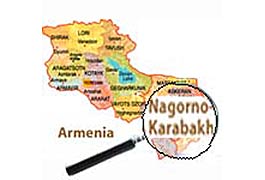 When speaking about the status-quo in Karabakh conflict and the impossibility of its preserving, many people understand it like a hint to yield territories to Azerbaijan.
Actually, changing of the status-quo does not at all mean yielding territories, the head of the General Information Department of the NKR president's staff, David Babayan, told journalists today.

"To change status-quo means to settle the conflict. Azerbaijan will recognize Artsakh, and Artsakh - Azerbaijan and the conflict will be settled. We categorically rule out yielding territories", - he said.

He also added that to understand the core of the conflict, one has to look into the root of the conflict, which arose from breaking of Artsakh. It is no secret that earlier only a part of the historic Artsakh became the territory of Nagornyy Karabakh Autonomous  Region. This situation developing for 70 years, was unacceptable. For this reason, they made an attempt to subordinate Nagornyy Karabakh directly to  the center - Moscow. "Further events showed that this option is incorrect. That time, Nagornyy Karabakh decided to self-determine. As a result, we saw Azerbaijan's aggression against Nagornyy Karabakh. As a result of the battle actions, we have got a situation which is preserved for 20 years. This option proved its vitality. For this reason, to go back to the reality of 1988 or 1991 is unrealistic", - Babayn said.

When commenting on a statement by Russia's Foreign Minister Sergey Lavrov, Babayan said one should not understand the recent statements by the Russian diplomat as a matter of fact. "The problem of territories is important to Azerbaijan, our problems differ. We have to negotiate and make arrangements. Of course, we categorically rule out yielding  territories, as these territories are the guarantor of the NKR security. As for Moscow, I don't think that it  is trying to impose pressure upon the Armenian party, as it has always preserved a neutral attitude", - Babayan said.

To recall, Sergey Lavrov said at the joint press-conference with his Azerbaijani counterpart that status-quo is unacceptable for everybody, Azerbaijan, Armenia and Nagornyy Karabakh.