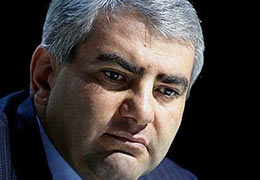 President of Tashir Group Samvet Karapetyan, the new owner of the Electric Networks of Armenia (ENA) CJSC, has made a statement unveiling the strategy of upcoming reforms at ENA.

According to Karapetyan, ENA CJSC will continue fulfilling its previous commitments in full. Tashir Group has undertaken the responsibility for transparent management of ENA basing on such important component as the corporate social responsibly. Samvel Karapetyan says in the statement that among ENA's prior tasks is to introduce an anti-crisis program, optimize financial activity of the company, improve the quality of services, control over the financial and economic activity also through introduction of up-to-date technologies.

"First and foremost, we plan to modernize the infrastructure of the power distribution networks through effective investments. We will launch an uncompromising fight against corrupt staff members and mala fide consumers. We will reduce the company's expenses through concentration of internal resources and reduction of electricity loss, which will enable us to avoid the need to increase the electricity price.  The interests of the three million people are important to us. They cannot be compared to the benefits or interests of some corrupt employees and mala fide consumers. To support the population of Armenia, a decision was adopted that the Government of Armenia and Tashir Group will subsidize the difference between the electricity price effective before the August 1 price hike for the population and small businesses. We are ready for new approaches, new quality of work, fair and constructive partnerships," Karabakh says in the statement.

To recall, Tashir Group and Inter RAO signed an agreement of sale and purchase of electric energy assets in Armenia.  The deal was approved by the Armenian Government and was closed after the decision of Public Service Regulatory Commission. The parties agreed that Electric Networks of Armenia and Hrazdan Thermal Power Plant will continue to meet all the liabilities. Tashir Group takes full responsibility for the management of CJSC "Electric Networks of Armenia", said the President of Tashir Group, Samvel Karapetyan.  Future development plans include an anti-crisis program to optimize the Company's financial activities and control its commercial operations, as well as gradual modernization of its distribution network facilities. On a parity basis with the Government of Armenia, the Company will cover part of the electricity costs of the general public and small businesses for the whole of 2015, compensating the difference between tariffs before and after indexation on 1st August 2015.

Boris Kovalchuk, Chairman of the Management Board of Inter RAO said: ''We agreed with Tashir Group to close the deal on terms that reflect the fair value of the assets. This approach will enable both parties to secure maximum economic benefit''.