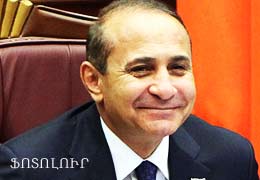 As press service of Armenia's National Assembly reported, Sharmazanov highly appreciated the initiative of Russian public figures to visit Nagorno Karabakh in person and learn the truth about Artsakh and its people. Attaching importance to the strong interstate relationship between Armenia and Russia in various spheres, the vice speaker spoke about the necessity of active social contacts aimed at further strengthening of these relations, as well as about efforts and a compassionate attitude to support and assist each other.

The Russian reporters and public figures spoke with admiration about endurance and solidarity of the hospitable people of Artsakh and their determination to live in an independent and prosperous state. They said unanimously that peacefulness is one of the characteristic qualities of Artsakh residents. They assured E. Sharmazanov that their initiative will continue and that they have serious goals to implement various cultural and humanitarian programs in Artsakh.