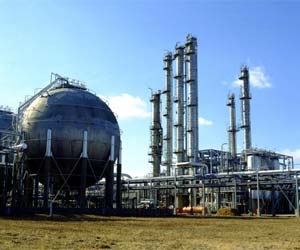 Rosneft Company, Russian, is currently negotiating with the Armenian Government for modernization and reactivation of Nairit Plant CJSC, the only producer of rubber in the CIS, Hrach Tadevosyan, Head of Nairit Plant Trade Union told several dozens of the plant's employees picketing the Government building on Monday.

Tadevosyan said that he met with the deputy minister of energy and natural resources of Armenia Ara Simonyan and introduced the demands of the picketers. In particular, the employees of the plant demand their salaries for the last two months and information on the fate of the plant that has been idling for already 3 years. He said that Rosneft Company leadership had recently met with the president and prime minister of Armenia and, as he was told in the government, the Russian company is currently studying the situation on the plant, the mechanisms of supply of raw materials and sales, as well as the financial situation. Big investments are in question, Tadevosyan said.

(It was reported earlier that the Russian petroleum company Rosneft and the Armenian Oil Techno CJSC signed an agreement on creation of a JV on April 4 in Yerevan).

As regards the salaries, Tadevosyan said, the arrears for March will be repaid on Friday and those for April will be paid in May. The plant has been idling for three years. Arrears of wages for 11 months have been accumulated. The monthly salary fund is $1 million, Tadevosyan said. By data of the plant's press-service, the total debt of the company is nearly $120 million. These are mainly loan debts. Some employees of the plant say it is dangerous to reactivate the plant without prior technological modernization. The plant employs 2700 people, with 1300 being on enforced leave. The average monthly
salary at the plant is 157,000 drams.

Earlier Russian media reported that in May, the Moscow Arbitration Court will hear Mezhgosbank's lawsuit against the owner of Nairit Plant CJSC, Rhinoville Property Limited, in the amount of $25.183 million.