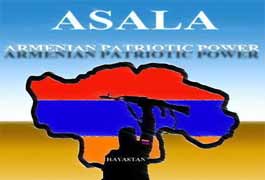 Armenian Secret Army for the Liberation of Armenia (ASALA) has disseminated a statement wherein it harshly criticizes the strategy of the Armenian authorities amid the geopolitical processes that directly affect Armenia.

ASALA believes that the authorities of Armenia intentionally held Constitutional referendum amid global geopolitical changes to distract the attention of the Armenian public from more pressing issues and from the need to express their stand on those processes.
ASALA believes that the Armenian factor cannot be omitted from the global and regional political processes.  "We should understand that the reason behind the Armenian people's defeats has always been its internal shortsightedness, not the might of the enemy," ASALA says in the statement.

The Armenian Secret Army recalls that it has passed a long path in Diaspora within a short period of time and now anticipates success in the Motherland on occasion of its 41st anniversary.