Oppositionist: Chief of Police has undertaken the role of the guardian angel of the ruling criminal-oligarchic regime 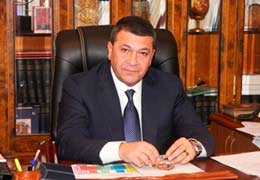 It seems that Chief of the Police Vladimir Gasparyan has undertaken the role of the guardian angel of the ruling criminal-oligarchic regime, Deputy Chairman of Armenian National Congress Party (ANC) Levon Zurabyan told journalists on Monday.

"By punishing his men for applying violence against journalists he has proved that the crimes actually took place. If so, why are those actually guilty are still free? In fact, the police are engaged in covering up the crimes committed by members of the ruling Republican Party," Zurabyan said.

Activists of the ANC Party were attacked in the Yerevan Administrative District of Ajapnyak, last Monday. The activists were campaigning in favor of the ANC at the upcoming elections to the Elders' Council of Yerevan when some twenty men attacked and beat them. According to ANC representative Gevorg Gevorgyan, the attackers declared it was the 'territory of the Republicans.  As a result of the attack, a 27-year-old Alik Sargsyan was hospitalized with injures. Fortunately, his life is not in danger.

The same day the ANC disseminated a statement saying that in the course of Mayor Taron Margaryan's meeting with voters in the Nor Nork Community, Aram Papyan, a member of the given community and the event organizer and his supporters beat up an opposition journalist Hakob Karapetyan. They seized the camera of the journalist and deleted the record. The journalist got bodily harms.  Earlier on April 22, another activist of ANC Alik Sargsyan and his wife were trying to distribute booklets in Ajapnyak community. A group of young men attacked and started beating Sargsyan for distributing leaflets in their 'territory'.

The young attackers did not conceal that they belong to the ruling Republican Party and said that the ANC members entered their "territory".  Sargsyan was hospitalized with numerous injuries.