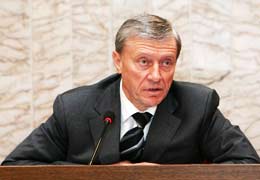 When selling arms to Azerbaijan, the Russian Federation was guided with the principle of military parity in the South Caucasus, CSTO Secretary General Nikolay Bordyuzha told media in Yerevan, on June 26.

He said Russia sells arms to dozens of countries. This business is one of Russia's economic development priorities. Arms are sold also to the countries not involved in the CSTO, Bordyuzha said. In the case of the South Caucasus, specifically, Azerbaijan, the key factor that influenced the decision to sell arms to Azerbaijan was to keep parity in the security field in the region, Bordyuzha said.

On June 15 reports on the supply of military hardware to Azerbaijan by Russia flooded Mass Media. The military hardware being supplied to Baku is worth between $700 million and $1 billion and includes 94 T- 90S tanks, about 100 BMP-3 infantry fighting vehicles, 18 Msta-S howitzers, 18 Smerch rocket launchers, 18 Vena "floating mortars," and six TOS-1A Solntsepek multiple launch rocket systems. Only in 2010- 2011 Russia supplied arms in the amount of nearly $3 billion to Azerbaijan.