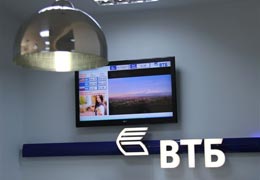 "VTB Bank (Armenia) was announced the best partner of the Financial Ombudsman's Office as a result of operative and technically competent attitude of both the parties to their responsibilities. We are grateful to the Financial Ombudsman's Office for such high assessment of our cooperation. We hope for even more efficient cooperation in the protection of human rights and customer interests in financial issues," says Yuri Gusev, Director General - Chairman of the Board of Directors at VTB Bank (Armenia).

To recall, the first in the CIS Financial Ombudsman's Office launched activity on 24 January 2009 in Armenia. The Office is engaged in protection of the rights and interests of bank customers, operative, effective and free consideration of their demands to upgrade the public confidence in the country's financial system.
VTB Bank (Armenia) joined VTB Group in April 2004. Russian VTB Bank OJSC holds 100% stake in VTB Bank (Armenia). The bank has been among leaders in the banking system of Armenia in terms of a range of key figures. It serves 67 branches throughout the country (the biggest branch network in the country).