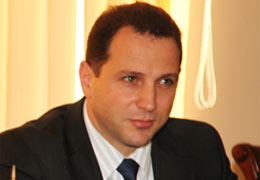 On the 30th August of 2013 the 1st Deputy Minister of Defence of the Republic of Armenia Davit Tonoyan met with the Head of ICRC Delegation to Armenia Lorenzo CaraffI. Mr. Tonoyan informed his interlocutor that faithful to international commitments of RA and exhibiting devotion to Human Rights and human values, as well as taking into account unambiguous position of a former Azerbaijani citizen was transferred by a relevant international organization to the 3rd country which has granted him with refugee status.  Armenian 1st Deputy Minister of Defence asked ICRC to inform the parents and kinsmen of current refugee that he has been successfully transferred to safe, secure, prosperous and democratic state, where nothing threatens his life.

Background info.It is necessary to remind that owing to being exposed to inhumane oppressions and torments, the Firuz Farajev had fled and crossed Armenian border in July 2012, where International humanitarian organizations have had unhindered meetings with him. Decision on transfer to the 3rd country was made based on a free expression of his will, exploration of factual findings and an explicit notion of morals and manners in place in Azerbaijan and hence  harsh destiny awaiting Azerbaijani POWs upon return.