Zaruhi Postanjyan: "A bomb will explode in domestic political life of Armenia" 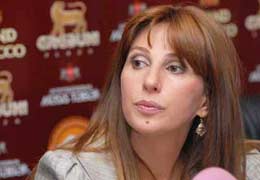 The national interests of Armenia demand urgent presidential and parliamentary elections, Zaruhi Postanjyan, MP from Heritage Party, told journalists on June 28.  She thinks that the political and civil sectors should join forces to achieve that goal. Postanjyan expressed displeasure with the level of cooperation between the opposition forces. Postanjyan believes that their cooperation should cover more and more fields.

Postanjyan stressed that "a bomb will shortly explode" in the domestic political life of the country. "The changes must happen today, not in the autumn as our opposition colleagues think. The power should be returned to the people immediately!" she said. The need for cardinal changes is dictated by the fact that Armenia is in a vulnerable situation - large-scale migration, permanent ceasefire violation on the border and the shortsighted foreign policy of the authorities undermine the country's immunity and its ability to resist the challenges.

Postanjyan also criticized the behavior of the Armenian Delegation to PACE. She thinks that the Armenian MPs should not have kept silence during Ilham Aliyev's speech. "It is the silence that let the Azerbaijani leader make a couple of provocative and aggressive statements. Certainly, I would have asked him a couple acute questions", she said.