Deputy from opposition: The shameful Armenian-Turkish Protocols should be removed from the agenda of the parliament 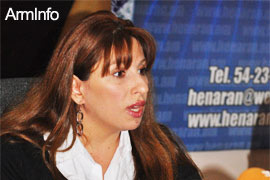 For his part, Abrahamyan said this issue is beyond the competence of the speaker of the parliament. Postanjan replied that Abrahamyan is a politician and has got certain levers to help removing this issue from the agenda of the parliament, as he is the speaker of the parliament. "You should be concerned about the availability of such shameful protocols in the parliament. You can organize protest actions for its withdrawal, if you cannot use other levers", - she said.  Abrahamyan did not agree to Postanjan that the protocols are shameful. "If the protocols were ratified by the two countries, they would give a great opportunity to develop economy, as they are not linked with the Armenian genocide or other political processes. The borders should be opened without any pre-conditions. That is right. It would  give an impulse for development of Armenia's economy", - Abrahamyan said.

To note, the Armenian-Turkish Protocols were signed in Zurich on 10 October 2009, but were not ratified by the parliaments of Armenia and Turkey as the latter put forward pre-conditions for their ratification.