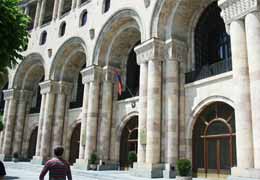 It says that Foreign Minister Edward Nalbandyan will be appointed as Ambassador of Armenia to Switzerland in place of Charles Aznavour, with his post to be given to the head of the presidential staff Vigen Sargsyan, who, according to the newspaper, has long dreamed of it.