Naira Zohrabyan: Prosperous Armenia and Republican parties do not negotiate over elections to Elders' Council of Yerevan 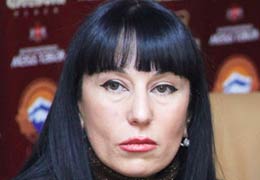 Prosperous Armenia Party (PAP) and the Republican Party of Armenia (RPA) have held no talks over elections to the Elders' Council of Yerevan, Naira Zohrabyan, Secretary of the PAP Faction, told ArmInfo.

"PAP does not hold talks behind the back of the public and does not engage in distribution of mandates. The party will fight for fair elections and for the voice of the citizens that remain unheard, and not for a place to feed at the through of a European official," she said.  Zohrabyan refused to comment on the termination of Raffi Hovannisian's hunger strike as she think it Hovannisyan's personal affair.

"Such issues must be considered from the humane point of view and should not be commented alongside with political processes.  Itishispersonalaffair. If he thought it necessary to start hunger strike and stop it, that was the way, probably," she said.  To recall, Hovannisian announced hunger strike on March 10 demanding resignation of the president. Later on March 29, he declared about his intention to stop hunger strike and start meetings with his supporters in the regions of Armenia.

"Before April 9, the day of the president's swearing-in ceremony, we will gather our army and achieve victory," he said.