Tigran Sargsyan: There is a problem of oligopolies in Armenia 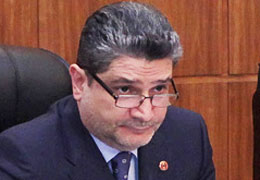 There is a problem of oligopolies in Armenia and it is not easy to fight them, Prime Minister Tigran Sargsyan said at today's press-conference when summing up the results of the passing year.

On the one hand, they should be put under control of certain standards and laws should be toughened up every year. But on the other hand, it is necessary to create wide field for small and medium-sized business, as Armenia may have future if a middle class is formed in the country, he said. "Sometimes, the fight becomes tense and we see that in the attacks by mass media financed by oligarchs. As soon as attacks grow, it means that we touched the painful point and it is necessary to lead the reforms to the end. Sometimes, it is calm, and it means that something is wrong and we missed something if these forces do not criticize the premier", - Tigran Sargsyan said. For this reason, the Commission for Ethics Problems of Top Officials was set up. It was targeted at the people not to enter the political field so that to sponsor their business, he said. The first step was made when the law on ethics was adopted and turned 500 high rank officials into the target.  Earlier, 18 thsd officials submitted income declarations, but this was not effective."We abandoned this model and decided that 500 officials should submit income declarations which will be publicly available. The public control of the politicians is the most important factor which will affect our political field. Over the next three years we are going to enhance the commission on ethics, give extra instruments and capabilities to it. We should be resolute and demonstrate political will", - Sargsyan said.