Four opposition parliamentary forces to submit 12 claims to the Government 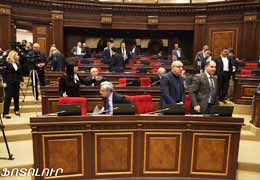 He said that the claims mostly concern domestic policies. "Our goal is to ensure drastic reforms inside the country. One of our claims is to transit to 100% proportional parliamentary elections," Hakobyan said.

He said that in the autumn the forces will organize a joint rally.