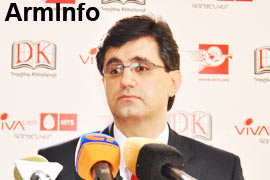 Three families celebrated housewarming in the borderland village of Khachik, Vayots Dzor region. Owing to the partnership between VivaCell-MTS and Fuller Center for Housing Armenia the construction of two half-built houses was completed and one more family renovated the roof of the house in the frames of the housing project. The heads of the partnering organizations visited Khachik community to share the joy of housewarming with the families, the VivaCell-MTS press-office said.

For those living in borderland communities a decent home is not only a necessary living condition but also a matter of strategic importance. When the walls of the house are strong, the border of the Homeland is strong, too, because villagers do not have a desire to leave their homes and their country.

The large family of  Hayrapetyans has lived in a soil  house, which in war time, has become even more deteriorated.

"It's already several years we have started the construction of the house. We hoped to slowly finish the construction of the house, but were unable to do it without support.  Today my family, from young to old, is full of vigor and hope for a better future. It seems that a new life has begun for us. We are endlessly grateful to you," said Valerik, the father of Hayrapetyan family.

"It is not the first time that Khachik village has appeared in the center of VivaCell- MTS attention. Years ago we built a water supply and a playground in Khachik; provided ambulance cars for the village. We have tried to solve the most acute problems of this borderland community. Now the housing problem of three families has been solved. I am convinced that the readiness to support our compatriots with programs of this kind is important not only from social, but also strategic point of view. 13 families of this  region have benefited from the housing project implemented in cooperation with the Fuller Center for Housing Armenia. This number is of high value to us," said VivaCell-MTS General Manager Ralph Yirikian.

"As it is said, everything is possible. The impossible just takes more time. The problems that seemed impossible to these families have now been solved. Yes, many years have passed, many dreams have died and resurrected. I think, from now on, the hope for believing, struggling and making the impossible possible will rise again in the hearts of these families and those, who surround them," said Fuller Center for Housing Armenia president Ashot Yeghiazaryan.

Till date, VivaCell-MTS has contributed more than 228.3 million drams for the basic reconstruction or renovation of houses thus improving the life quality of 480 people with social needs in 10 regions of the country, including 31 villages, of which 9 are borderline villages.

VivaCell-MTS (K-Telecom CJSC) is Armenia's leading telecommunications operator, having the widest 2G/3.75G/4G network reach and spreading a wide range of Voice and Data services all across Armenia.  Having the best of the Armenian people interest at heart since its launch on 1st July 2005 and in a short period of time VivaCell-MTS has managed to build a nationwide network and a considerable customer base.  VivaCell-MTS drives innovation and aims at always being at the forefront of any development serving the Armenian mobile communications market.  The company follows the guidance provided by ISO 26000 (International Standard of Social Responsibility) and ISO/IEC 27001:2013 (Information Security Management System).

Mobile TeleSystems OJSC ("MTS") is the leading telecommunications group in Russia and the CIS, offering mobile and fixed voice, broadband, pay TV as well as content and entertainment services in one of the world's fastest growing regions. Including its subsidiaries, the Group services over 100 million mobile subscribers. The Group has been awarded GSM licenses in Russia, Ukraine, Turkmenistan, Uzbekistan, Armenia and Belarus, a region that boasts a total population of more than 200 million. Since June 2000, MTS' Level 3 ADRs have been listed on the New York Stock Exchange (ticker symbol MBT).

Fuller Center for Housing Armenia is a non-governmental, charitable organization that supports community development in the Republics of Armenia and Artsakh by assisting in building and renovating simple, decent and affordable homes, as well as advocating the right to a decent shelter as a matter of conscience and action. FCHA provides long-term, interest-free loans to low-income families.  The monthly repayments flow into a Revolving Fund, which is used to help more families, thereby providing a financial foundation for sustainable community development. Since 2008 the Fuller Center for Housing Armenia has assisted more than 460 families.