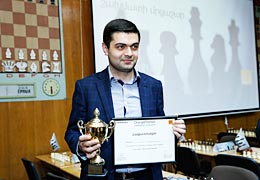 Corporate Customer Manager of VTB Bank (Armenia) Arsen Naghdalyan has won a chess tournament organized by Orange Armenia for Orange Premier subscribers on the occasion of the company's fifth birthday.

The press service of VTB Bank (Armenia) reports that the Board of the bank has congratulated Naghdalyan on his victory and has wished him new achievements.

The tournament involved 27 players. The best four had a chance to play with the two-time champion of the Chess Olympiad Tigran Petrosyan, while Naghdalyan will be able to attend Zurich Chess Challenge to be held Feb 13-19 2015 and to see Fabiano Caruana, Vishwanathan Anand, Vladimir Kramnik, Levon Aronian, Hikaru Nakamura.