Armenian expert: Armenia cannot keep a foot in both worlds 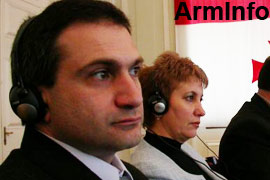 The geopolitics, the situation in the region, and Russia have changed, Sergey Sargsyan, senior expert at Noravank Foundation, said at the Dec 18 international conference "Security and Cooperation in the South Caucasus".

He thinks Armenia's involvement in European integration would not have become so topical if the Kremlin had not initiated the project of the Eurasian Union. So, the countries were forced to choose between Eurasian and European integrations. Sargsyan thinks that after accession to the Customs Union, Armenia's political and economic cooperation with other countries will be determined on leftovers only.

The conference has been organized by PolitContakt NGO (Russia) and Noravank Foundation (Armenia) and will last till December 20. It will discuss prospects for creating regional security systems in the South Caucasus, Iran-Turkey relations amid the Syrian crisis, consequences of the Eurasian integration for greater Near East and the current status of Karabakh peace process and settlement prospects, as well as the economic integration of the South Caucasus states. Experts from Armenia, Russia, Lebanon, Iran, Azerbaijan and Georgia are taking part in the conference.