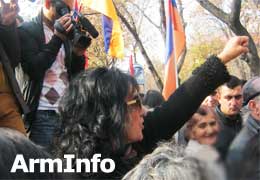 Public interest group "Independent Citizen of Armenia" is picketing the Armenian Parliament, where the Armenian-Russian Agreement on transfer of 20% shares in ArmRusgasprom to Gazprom, Russia, is to be ratified within the coming hours.

The activists say the deal runs contrary to Armenia's interests and will endanger energy security making the country fully dependent on Gazprom. They claim that if ratified, the agreement will threaten Nagorno Karabakh's existence.

To recall, the Armenian Government's last 20% share in ArmRusgasprom was sold to Russia's Gazprom in the course of Vladimir Putin's visit to Armenia in early December. Due to the deal, Gazprom will now supply gas to Armenia on internal Russian tariff, namely, for $189 per 1000 cu m on the border.