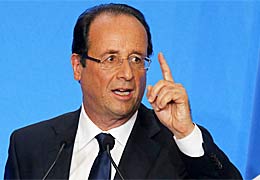 The statement published on the Turkish Foreign Ministry's website says, "French President Francois Hollande participated, as he had announced long time ago, at the ceremony held in Yerevan on 24 April 2015, which instead of being a commemoration for the losses incurred in the past, turned out to be an occasion to slander Turkish identity, history and society. Regrettably, he once again reiterated his support to the Armenian nationalist narrative.

Similarly, Prime Minister Valls, in a speech he gave today in Paris, distorted historical facts and violated legal principles at an event he participated which was not held with the understanding of harvesting peace and friendship from history but rather hostility.  It would have been expected from President Hollande that during these ceremonies he would acknowledge that, regardless of religion or ethnicity all Ottoman citizens endured tragic sufferings during the process of the collapse of the Ottoman Empire.

Such an approach which does not discriminate between the sufferings of those who belong to different religions would have undoubtedly been seen as a positive and embracing attitude by the six hundred thousand Turks living in France.

To recall, at the memorial ceremony at Tsitsernakaberd Complex in Yerevan on April 24, Francois Hollande said that France has recognized the Armenian Genocide because it wants to see no such crimes in the future. "By participating in these events, we make our own contribution to the process of reconciliation, process of expanding peace in the region, in the world, in the Middle East. The recognition of the Armenian Genocide is one more act of peace," President Hollande said.