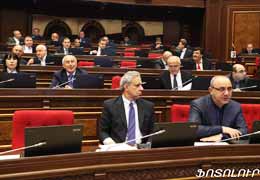 Parliamentary opposition in Armenia urges people to fight the mandatory accumulative pension system till the very end. Representatives of the Armenian National Congress, Heritage, Prosperous Armenia and ARFD parties factions in the parliament along with the members of the Public Interest Group "Against Mandatory Pension Payments" marched from the Liberty Square to the Constitutional Court (CC) of Armenia earlier today and demanded the CC to recognize the parliament-passed law on the mandatory pension payments as unconstitutional.

Employees of many companies, representatives of public organizations and Artsakh War veterans also joined the activists. Secretary of Prosperous Armenia Party Faction Naira Zohrabyan addressed those gathered in the Liberty Square saying that representatives of big business companies give false promises to their employees. They will not be able to pay the mandatory pension payments instead of their employees for years. Zohrabyan is sure that big businessmen and the authorities have made a deal to ease public tension with such false promises.

Head of ARFD Faction Armen Rustamyan, in turn, said that the new law will deteriorate the living conditions of all the citizens without exception. Furthermore, he said, introduction of the mandatory pension system is a severe blow over the national system of values.