Government of Armenia to keep down unfounded growth of tuition fee 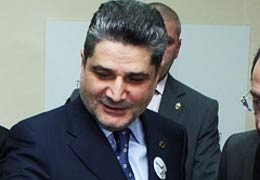 The government of Armenia is going to keep down the unfounded growth of the tuition fee in universities, Prime Minister Tigran Sargsyan said at today's session of the government.

"The government will have a tool to set the upper limit of tuition fees. Today we are not authorized to but our pledge was based on the international practice. The state is using this tool because this problem is highly serious to the society," Tigran Sargsyan said. According to the prime minister, the society must know that the state may interfere with groundless rise in tuition fees.

After raising of the gas and electric power tariffs in July 2013, Armenia's Education Minister Armen Ashotyan reported about the new decision of the government, according to which in five universities of the country, including Yerevan State University, the tuition fee grew by 100 thsd drams (about $250). This caused protest actions of students.