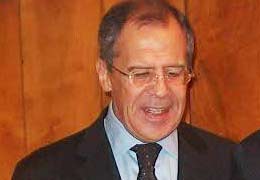 The OSCE Minsk Group is exerting big efforts to encourage the Karabakh conflict parties to adopt a document on the political principles of the conflict settlement, Russian Foreign Minister Sergey Lavrov has told ITAR-TASS.

"Certainly, we are concerned with what is going along the so-called Line of Contact. The parties blame each other for provocations. This also happened before, and unfortunately we have been observing regular escalation for many years. This time, however, the escalation is perceived and presented very emotionally.  Many people have died and together with other countries, including the other OSCE Minsk Group Co- Chairs (US and France), Russia has insistently urged the parties to be reserved and to avoid any steps that can lead to more violence", says Lavrov.

"Later this week, Sochi will host our President's separate meetings with the President of Armenia and the President of Azerbaijan. When they find themselves at a single location simultaneously, they may be unable to evade a talk on Nagorno-Karabakh. But it depends on us how it will be organized", says Minister Lavrov. He adds that he will talk to the partners from Azerbaijan and Armenia on how Russia, the OSCE Minsk Group Co-Chairs can help strengthen confidence and reduce the risks of confrontation.

"Both parties perceive the conflict rather emotionally. Together with our US and French partners, we are exerting big efforts to contribute to settlement of the problems, which still hinder conclusion of a document on political principles of the conflict settlement", he says.

The minister stresses that such a political statement on "the principles to be guided by in the conflict settlement would certainly contribute to normalization of the atmosphere".  "It is not easy to do that, numerous attempts have already been made and every time it seemed we were close to a breakthrough, something disturbed it. Therefore, I will make no forecasts", says Lavrov. He also stresses the need to continue helping the Armenians and Azeris to search for "the formulations that will be convenient to both parties".

Lavrov recalls that one of the meetings of the Presidents of Russia, Azerbaijan and Armenia was followed by an "obscure statement saying that measures of confidence should be developed". He thinks that when the tension escalates, the parties should exchange the captives or the bodies of the killed people and to coordinate additional steps to calm down the situation on the Line of Contact.