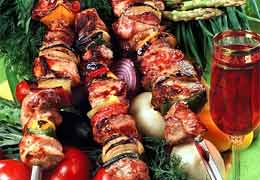 The 6th Pan-Armenian Barbeque Festival will be held in Akhtala on 6 September. The festival traditionally attracts a big number of guests. Last year, nearly 5,000 people attended the event.

Sedrak Mamulyan, Head of the Public Organization for Development and Preservation of Traditional Armenian Cuisine, told ArmInfo not only the festival will involve Armenian restaurants, but also teams from Georgia and the Armenian Defense Ministry. As many as 24 pavilions will be opened during the festival.

The teams will be competing with their BBQ and other dishes enjoying the music by The Beautified Project rock band. The guests will also enjoy theatrical performances and folk songs. The Armenian Defense Ministry Orchestra will open the event.

The participants will compete for victory in the following 10 nominations: Best Taste, Best Idea, Best Look, Best Pavilion, as well as the People' Choice Award and the Grand Prize. According to Mamulyan, the BBQ - winner of the Grand Prize will be set to auction, with the proceeds to be used for charity.