Nalbandian: Armenia has submitted the proofs of Azerbaijan's war crimes to Office of the United Nations Higher Commissioner for Human Rights 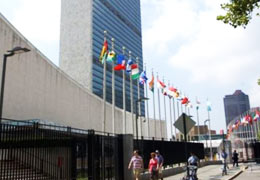 Armenia has launched measures to bring Azerbaijan accountable under international legal norms for the atrocities committed during its military aggression against Nagorno-Karabakh on April 2-5. Edward Nalbandian, Foreign Minister of Armenia, made such statement on the Armenian Public Television, on April 13.

"The proofs have been submitted to the UN OHCHR already today. A special letter was sent. This process will be continued, of course," the minister said.

Earlier, on April 13, Armenian Defense Minister Seyran Ohanyan and US Ambassador to Armenia Richard Mills discussed aggression initiated by Azerbaijan against Nagorno- Karabakh and the current situation on the line of contact of Karabakh and Azerbaijani troops. Ohanyan presented the main specifics of Azerbaijan's aggression including military crimes against servicemen and civilians by Azerbaijani military forces, as well as harshly violations of other provisions of law on armed conflict and emphasized that he will be consistent in presenting these crimes for international legal assessment.