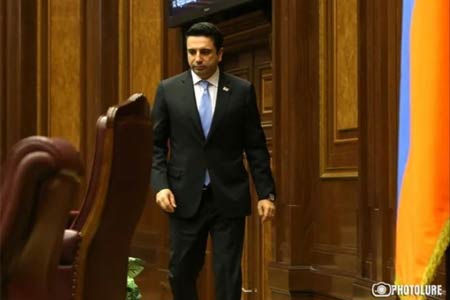 Simonyan noted that the CSTO is a military-political alliance, and  from a political point of view, the submitted document for approval  was not sufficient for signing. In particular, we are talking about  the withdrawal of troops of third countries from the territory of the  CSTO. "If the expectations from the CSTO had been justified, Armenia  would have signed the document," the head of the Armenian parliament  stressed, adding at the same time that Yerevan had never announced  its intention to leave the CSTO. "We have stated that the CSTO is  leaving the region, and we are extremely concerned about this. It is  necessary to send a question to our partners about whether the  Organization has really decided to leave the Caucasus region or not.  If it leaves, at least it must be publicly announced>, the speaker  said.

He also noted that upon joining the Organization, Armenia expected  concrete steps from the CSTO to protect itself from the  Turkish-Azerbaijani tandem. "But when the time came and the need for  assistance from the Organization arose, Yerevan expected at least a  political assessment, which did not happen, as a result of which the  Armenian side refused to sign the submitted document," the head of  the RA National Assembly noted, pointing out the importance of  revising the provisions of the Declaration.

The speaker urged not to confuse European civilian observers mission  with the military one. As Simonyan emphasized, this observation  mission only records violations at the border. <I want to emphasize  that this mission is a very serious deterrent. However, today we  don't see proper assistance, otherwise we wouldn't have prisoners of  war, there wouldn't be cases of invasion of Black Lake, Khtsaberd  settlement, Jermuk>, the NA President noted. He stressed that the  military model that was used in the post-Soviet countries does not  justify itself today, and the Armenian side is taking steps in this  direction.