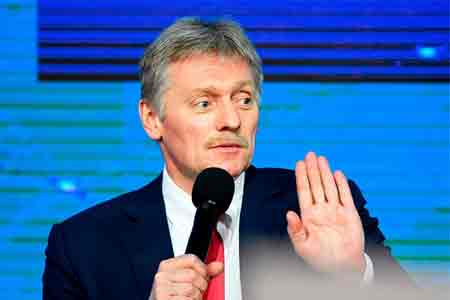 ArmInfo. The Kremlin commented on the publications of the Armenian media that Russia is allegedly seeking Armenia's entry into the Union State of the Russian  Federation and Belarus.

"No, this is another nonsense," said the presidential press secretary  Dmitry Peskov, answering the question of whether the Russian  Federation has such plans, the Russian media reported.

As ArmInfo previously reported, the Haykakan Zhamanak newspaper,  owned by the family of Prime Minister Pashinyan, who was its  editor-in-chief for many years, came out today with a " leading  article " about "what Russia wants." According to the article, which  analysts say is similar in style to Pashinyan's style himself,  "Russia's desires in our region are part of its global desires chain  and Armenia and Artsakh (Nagorno-Karabakh) are a link in this chain  of its desires."

As noted in the article, Russia almost wants from Armenia what it  wants from Ukraine, so that it becomes part of the union state of   "Russia-Belarus" or Russia. And if in the case of Ukraine, the  Russian Federation uses Russian and, possibly, Belarusian troops for  such a result, then in the case of Armenia, it uses Russian troops  deployed in Azerbaijan (probably this refers to troops deployed in  Artsakh) and to some extent in Armenia. The meaning of the actions is  as follows: to show the vulnerability of Armenia's security so that  the latter applies for membership in the Russia-Belarus union state.

"The steps to develop this logic are the aggressiveness of  Azerbaijan, the inertia of the Russian troops deployed in Armenia,  the political inertia of Russia, the refuse to fulfill its  obligations on the supply of weapons to Armenia. The use of the  latter means is not accidental and was used earlier, for example,  before and after the 2016 war. Armenia should to be as vulnerable as  possible in order to hug Russia as closely as possible," the article  says.