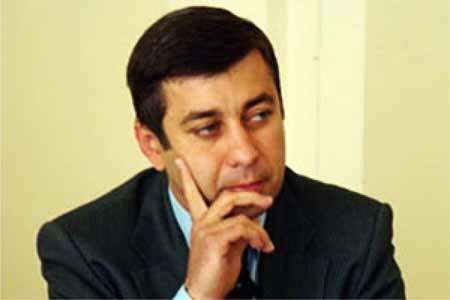 ArmInfo. In an interview with the National Public Broadcasting Company of Ukrain, Armenian Ambassador to Kyiv Vladimir Karapetyan raised the issue of Armenian  prisoners of war held in Azerbaijan.

The ambassador stressed that there was an agreement at the highest  level that the exchange of prisoners should be based on the  principle: "all for all." The Armenian side handed over all the  prisoners, even criminals convicted under completely different  articles, including murder.  According to the ambassador, the  Armenian side has relevant documentary evidence, video recordings, as  well as testimonies of prisoners who have already returned to  Armenia.  Karapetyan added that the Azerbaijani side released part of  the Armenian servicamen in exchange for maps of minefields.  "The  leadership of Armenia, as a manifestation of goodwill, handed over  maps of minefields that we had at our disposal since the 1990s, since  the first Karabakh war," the ambassador explained, "Armenpress"  reports.  The diplomat emphasized that the handed over maps  significantly reduced the number of people who died due to landmines.

"Despite the fact that Azerbaijan publicly and repeatedly complained  about some inaccuracy of these maps, however, after their transfer,  the number of explosions significantly decreased, there were only one  or two accidents. Our maps are quite accurate, but the elapsed time  must also be taken into account," he concluded.

It is worth noting that the exact number of prisoners of war and  civilians held in Azerbaijani captivity after the large-scale  military aggression of Azerbaijan against Artsakh in the fall of 2020  is still not known.  According to experts, there are several hundred  of them. Baku confirms that there are 38 prisoners of war.  Armenian  prisoners of war and civilians are subjected to inhuman treatment and  torture in captivity. Many of them have been sentenced to long-term  prison terms in fabricated criminal cases.