Zakharova: Implementation of the agreements between the leaders of  Russia, Armenia, Azerbaijan will ensure a comprehensive normalization  of relations between Baku and Yerevan 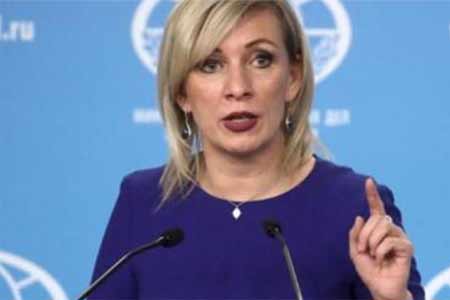 ArmInfo. Moscow has always emphasized that the unblocking of all transport and economic ties in the South Caucasus works to consolidate positive trends and,  ultimately, to improve the situation in the region. Official  representative of the Russian Foreign Ministry, Maria Zakharova,  announced this on June 29 during a weekly briefing.

In her opinion, the implementation of the relevant agreements of the  three countries (statements by the leaders of Russia, Armenia,  Azerbaijan, ed. note) will ensure a comprehensive normalization of  relations between Baku and Yerevan.

On the night of November 10, the presidents of Russia, Azerbaijan and  the Prime Minister of Armenia announced that the war in Nagorno  Karabakh was being stopped. The fighting ended on November 10 at 1:00  am (exactly at midnight Moscow time). Vladimir Putin, Ilham Aliyev  and Nikol Pashinyan signed a joint statement, which discusses the  terms of peace in Nagorno-Karabakh.

According to this notorious agreement, 9 regions around  Nagorno-Karabakh were transferred to Azerbaijan, including two from  the NKAO. Moreover, Russia sent a contingent of peacekeepers to  Nagorno-Karabakh for a period of at least 5 years. If neither Armenia  nor Azerbaijan objects, this period will automatically be extended  for another five years. They will control the Lachin corridor, which  links Stepanakert with Armenia. According to the statement of the  Russian Ministry of Defense, the control will be carried out by about  1,960 servicemen, 90 armored personnel carriers and 380 units of  special and automotive equipment.

The parties also agreed to unblock all transport and economic ties in  the region, and return all prisoners of war on the "all for all"  principle. It is noteworthy that this point is not fulfilled by  Azerbaijan 1.5 years after the signing of the statement.