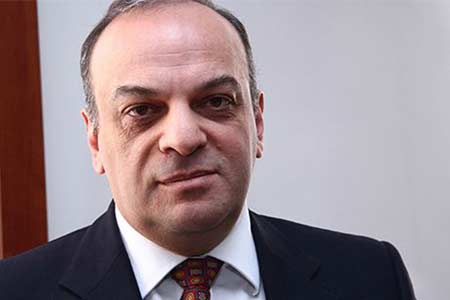 ArmInfo.Yerevan will agree to cooperation, including cooperation with Baku and Ankara, if Brussels and Moscow demand it, Ambassador Arman Melikyan said in an interview with ArmInfo.

"This is an immediate consequence of the defeat in the 44-day war.  Therefore, the incumbent Armenian authorities are not only unable to  defend Armenia's interests, but they are also unable to clearly state  them.  Whether we want it or not, Armenia has lost its statehood, and  regaining it requires unconventional approaches, with neither the  authorities nor the protesting opposition displaying them," Mr  Melikyan said.

Artsakh's future depends on the Armenian authorities' behavior in the  context of geopolitical developments. With Armenian Premier Nikol  Pashinyan aiming at retaining power, the authorities' actions to  ensure security of Armenia and Artsakh are, at best, "a short-term  outlook," whereas accomplishing this task requires long-term  strategies.

The result is, according to Mr Melikyan, that the Pashinyan-led  government is under tremendous pressure by Turkey and Azerbaijan.  Unable to clearly state their interests and, therefore, without a  clear agenda, Armenia's authorities can only drag the time under the  pretext of border delimitation and demarcation. The result is that,  instead of using the available time to develop a strategy, Yerevan is  talking about social programmes in Artsakh.

"And Charles Michel's statement following the Brussels meeting about  the 'rights of the ethnic population of Karabakh' is evidence that  the issue of Artsakh's self-determination and sovereignty has been  removed from the political agenda. The European Union does not at all  care about Artsakh's future status and about its being part of any  state. The main thing is the supply of Azerbaijani energy resources  to Europe through Turkey. As a result, Armenia and Artsakh are now in  a worse situation than in the early 1990s," Mr Melikyan said.