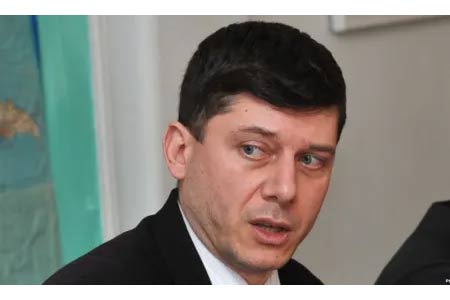 ArmInfo. A "no-win" outcome in the Ukraine war will substantially  strengthen the rear of Recep Erdogan and Ilham Aliyev in the South  Caucasus, including in their relations with the West, Hovsep  Khurshudyan, Head of the Free Citizen NGO, said in an interview with  ArmInfo.

"In this case, Ankara and Baku will be able to oppose the West's  pressure - not demanding settlement of conflicts based on  international law, respecting human rights, exercising corruption  control and so on. And once the West demands that they do it, Erdogan  and Aliyev will immediately resort to energy blackmail and threats of  a geopolitical U-turn in Russia's favor. In this respect, Armenia and  Artsakh should not at all place their hopes on a 'no-win' outcome in  the Ukraine war," he said.

On the other hand, Mr Khurshudyan does not dare predict a 'no-win'  outcome in the Ukraine war. Rather, Russia would give up the idea of  establishing control over Ukraine after suffering defeat there.  Without suffering a crushing defeat, Russia will, nonetheless, leave  Ukraine in the course of time. And the current trends are evidence  thereof, Mr Khurshudyan said.

As regards the Russian army's successful advance in Ukraine, it is  the result of mobilization ensuring overwhelming numerical  superiority for Moscow. However, it is a temporary trend, primarily  due to the geopolitical reality - even if Russia invaded entire  Ukraine, it will not hold its ground.

"It is neither good nor bad. It is geopolitical reality. Russia can  occupy entire Ukraine, but will not be able to have it permanently  occupied. In any case, it will be short-lived victory. As to a  'no-win' outcome, the very same Azerbaijan's inevitably drawing  closer to Russia will be accompanied by processes like that in  Parukh. Moscow will have to pay for Baku's loyalty - at the Armenian  side's expense. I think Yerevan is perfectly aware of all such  prospects. I think the West's growing interest in our region affords  us opportunities we should by no means miss," Mr Khurshudyan said.