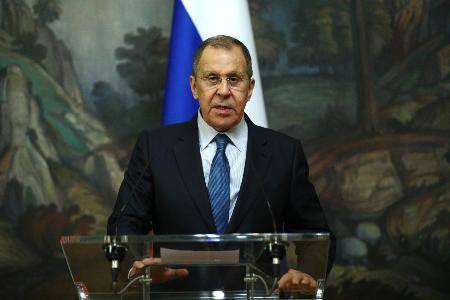 ArmInfo. Russian Foreign Minister Sergei Lavrov spoke about the mechanisms for expanding the CSTO. According to him, everything is written in the CSTO charter,  and whoever wants to join should make a request.

" In the last year and a half, the heads of state have signed a protocol amending the  charter, and in addition to the full members of the organization,  partner and monitoring institutions are being established," Lavrov  noted, adding that this information was sent to partners and there is  interest at least in establishing contacts.

At the same time, the Russian minister noted that journalists would  be informed about the processes on this issue.  Regarding the  Organization's peacekeeping operation in Kazakhstan, the Russian  minister noted that the situation in that country demonstrated the  effectiveness of efforts to create the CSTO's peacekeeping potential.  "The situation in Kazakhstan has demonstrated that the efforts that  the CSTO has made in recent years to form a peacekeeping potential  have been very effective and have been in great demand. As they say:  "if you want peace, prepare for war". Well, thank God, things did not  come to a war, but in my opinion, the potential of the CSTO  peacekeeping forces proved its viability to the whole world. In the  West, they looked with amazement at the speed of deployment of units  sent from all the CSTO member countries to help Kazakhstan", the head  of the Russian Foreign Ministry noted.

At the same time, he expressed the hope that this experience would no  longer have to be applied. However, according to him, it is necessary  to keep the gunpowder dry. <God forbid, something like this happens,  although we are doing everything possible to prevent this, including  through the relevant bodies of the CSTO, but we must be prepared,  because encroachments from outside will undermine the situation in  Central Asia and in other CSTO countries. These encroachments became  much more active, risky and dangerous after the Americans along with  the rest of NATO ran away from Afghanistan, Lavrov concluded.