"Roadmap" of cooperation signed between Yerevan and St. Petersburg 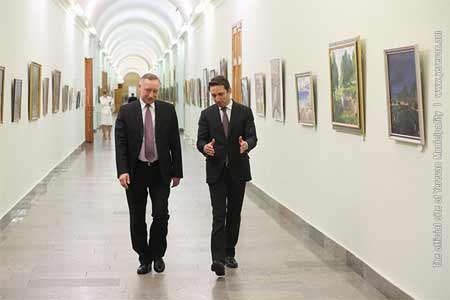 ArmInfo.A "Roadmap" of cooperation was signed between Yerevan and St.  Petersburg. Mayor of Yerevan, Hayk Marutyan, and Governor of St. Petersburg, Alexander Belov yesterday, signed the agreement. We note that a delegation led by Yerevan Mayor Hayk  Marutyan visited the northern capital of Russia at the invitation of  St. Petersburg Governor.

As ArmInfo was told in the press center of the Yerevan Mayor's  Office, the official meeting of the city leaders took place in the  Smolny Palace. The parties stated that the signed document will give  a new quality to the implementation of practical programs between the  two cities, the implementation potential of which is significantly  high.

The official signing ceremony of the five-year cooperation program  took place here. Governor of St.  Petersburg Alexander Beglov and  Mayor of Yerevan Hayk Marutyan signed an agreement for 2021-2025.   According to the document, the parties committed themselves to  significantly expand cooperation in various areas of the urban  economy over the next 5 years. In particular, joint programs will be  implemented to expand trade, economic, scientific and technical ties,  as well as in the cultural sector.

"I am sure that Yerevan and St. Petersburg will continue to expand  their partnership within the framework of the "Roadmap". Indeed,  there is a wide field for cooperation in the field of urban  development, social issues, health care, education and a number of  other areas of the urban economy, "Marutyan said and invited his  colleague to pay a return visit to Yerevan.

The Governor of St. Petersburg Alexander Beglov noted that the visit  would serve in the best way to strengthen ties between the two cities  and give a new impetus to mutually beneficial cooperation.  Prior to  his visit to Smolny, Hayk Marutyan visited the Piskarevskoye cemetery  and paid tribute to the memory of the victims and heroic defenders of  besieged Leningrad.