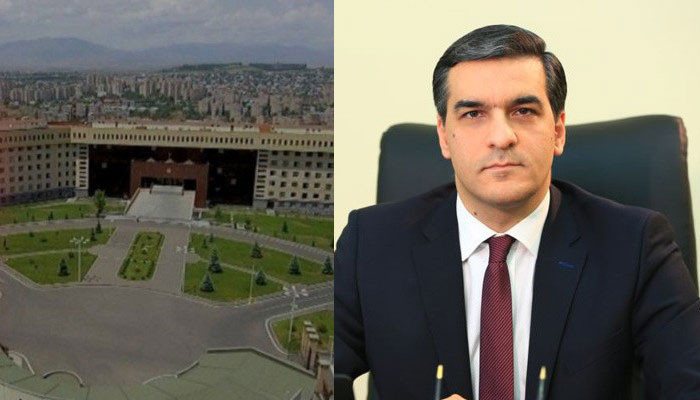 ArmInfo. The confrontation between the Ombudsman of Armenia Arman Tatoyan and the Ministry of Defense is gaining a new momentum.

The Ministry of Defense of Armenia issued a new statement in response to today's publication by Tatoyan, in which the latter called on the officials of the RA Ministry of Defense not to make short-sighted and thoughtless statements about his activities, thereby giving fertile ground for Azerbaijani propaganda to discredit its activities on international platforms. At the same time, the Ombudsman of Armenia once again stressed that he never makes unfounded and unverified statements, always supporting them with factual evidence that his office receives when collecting facts. According to him, this also applies to his message of October 18 stating that the Azerbaijani Armed Forces, which invaded the sovereign territory of the Republic of Armenia on May 13 of this year, are preparing for winter, carrying out fortification works, concreting roads, storing firewood. "After my statement from the Armenian Defense Ministry, a campaign was actually launched to discredit the activities of the Human Rights Defender, which was joined by the Secretary of the Security Council," Tatoyan said.

In response, the Armenian Ministry of Defense, in particular, stated: "In connection with the statement of the RA Human Rights Defender of October 21, the RA Ministry of Defense reaffirms its assertion that the Ombudsman's message of October 18 contains a number of gross inaccuracies, as well as data, clearly not corresponding to reality, in connection with the fortification work carried out by the Armed Forces of Azerbaijan in some parts of the Gegharkunik region.

It should be added that today, the Human Rights Defender in a telephone conversation on this issue, answering the question of the Minister of Defense, in which part of the territory of the Republic of Armenia the works depicted in his photographs are being carried out, noted that this is mainly carried out not on the territory of Armenia, in the "neighborhood". The RA Ministry of Defense calls on the Office of the Human Rights Defender to refrain from the approach of disseminating unverified information. "

To note, the Office of the Human Rights Defender is the institution that enjoys the greatest confidence in the Armenian society. It was the office of the HRD of Armenia that during all 44 days of the war unleashed by the Azerbaijani-Turkish tandem against Artsakh, mobilized all the resources to protect the rights of both civilians and the servicemen. It did this in the constructed period as well. Tatoyan's Office continues to voice the problem of Armenian prisoners of war and captive civilians at all possible platforms. It also alarms about the war crimes of the Azerbaijani Armed Forces against Armenian military personnel and civilians. A number of reports have been prepared in this regard.

Under these conditions, the behavior of the Armenian defense department, which discredited itself in the eyes of the Armenian society, after providing false information during the entire period of hostilities in the Karabakh conflict zone, is incomprehensible. Moreover, in such conditions, a logical question arises - whose interests does the Armenian defense department serve in this situation? Why, instead of consolidating efforts to ensure the protection of the rights of citizens of Armenia, to act together on all issues, thereby increasing the efficiency of work and its effectiveness, it suddenly began to denigrate the activities of the Ombudsman of Armenia. And one would like to think that in the current situation, the parties will show wisdom, learn lessons from history, and jointly defend the interests of the Republic of Armenia and its citizens, instead of serving the interests of the enemy, for the final division of the Armenian society.