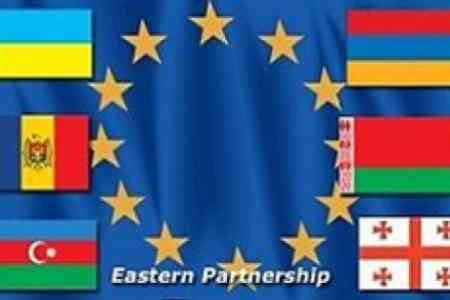 ArmInfo. Strengthening European Union cooperation with post-Soviet countries participating in the Eastern Partnership (EaP) program and strengthening Europe's  role in the Gulf region will be at the focus of the agenda of the EU  Foreign Affairs Council in Luxembourg, which will be held today.

"The foreign ministers will propose ideas for the ministerial meeting  and the Eastern Partnership summit, for future cooperation projects  between the EU and the EaP," a senior EU official said at a briefing  on Friday, Interfax reports.

He recalled that a meeting of the EU-EaP at the level of foreign  ministers is to be held in November, and a summit meeting in  December. Their goal is further rapprochement of the Eastern  Partnership countries with the EU, both economically and politically.

Ministers will focus on rebuilding the EaP countries after the  COVID-19 pandemic, their resilience and reform on Monday, in  Luxembourg. In particular, on solidarity with the Eastern partners in  the provision of vaccines.

The EU still considers Belarus to be a participant in the EaP  program, along with Azerbaijan, Armenia, Georgia, Moldova and  Ukraine, but has limited contacts with the Belarusian authorities to  the working level. Therefore, the head of the Belarusian Foreign  Ministry will not be at the November meeting, and Alexander  Lukashenko will not be at the December summit. The seat of the  Belarusian representative will be empty and without a flag.

Following a recent visit by EU head of diplomacy, Josep Borrell, to  Qatar, the UAE and Saudi Arabia, the EU's foreign policy project to  establish strong institutional relations with the Gulf Cooperation  Council has been revitalized. It was formed even before the  coronavirus pandemic, but then its implementation stalled.  The  ministers will discuss the EU's approach to the region, economic  interaction with its countries on the EU's global agenda. The EU  official  told the journalists that these countries themselves "have  their own good ideas about cooperation with the EU," Interfax  reports.