Meeting of Prosecutors General of Armenia, Azerbaijan and Russia held  in Nur-Sultan 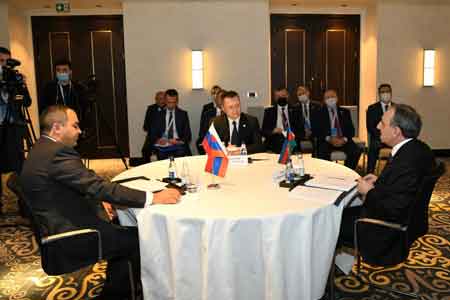 ArmInfo. A trilateral meeting of the Prosecutors General of Russia, Azerbaijan and Armenia - Igor Krasnov, Kamran Aliyev and Artur Davtyan took place in the  capital of Kazakhstan, Nur-Sultan.  According to the press service of  the Prosecutor General's Office of the Russian Federation, during the  meeting Igor Krasnov noted the effectiveness of the trilateral format  and reported on the significant results of the work done by the  parties to strengthen the rule of law in Nagorno-Karabakh and  stabilize people's lives over the past 9 months. The main task of the  Prosecutor General of Russia is to prevent the escalation of tension  among the population of the region as a whole.

He called for more intensive use of the opportunity to appeal to the  Russian military prosecutors deployed in Nagorno-Karabakh as a  channel for information exchange, including for transmitting alarms  about committed violations, as well as to continue work on the return  of citizens to their homeland.

Igor Krasnov thanked his colleagues from Azerbaijan and Armenia for  constructive interaction and focus on a common result - the  achievement of peace and stability for the benefit of the peoples of  the region. A positive level of interaction in the field of search  work for missing persons was noted.

During the event, the parties agreed to continue the prospecting  work.

The meeting participants discussed the implementation of the  statements of the leaders of Russia, Azerbaijan and Armenia and the  prospects for further legal cooperation.

The parties reaffirmed the previously reached agreement on the need  to intensify contacts to prevent further tension.