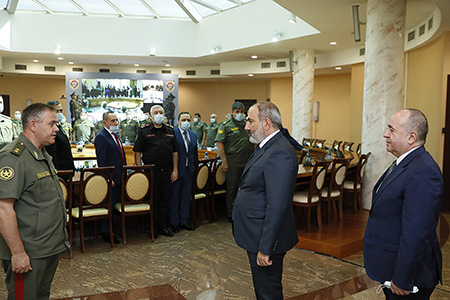 ArmInfo. Armenian Prime Minister Nikol Pashinyan introduced the newly appointed Defense Minister Arshak Karapetyan to the staff of the Ministry of Defense  and the senior officers of the Armed Forces.

According to the press service of the government, addressing the  Minister, Pashinyan stressed that the latter takes office at an  extremely difficult time for the country and the region.

Speaking about the tense situation around the borders of Armenia, the  Prime Minister noted that Azerbaijan is trying to create the  impression that it is shaping the agenda in the region and around  Armenia, and in fact is imposing this agenda. "However, Armenia has  its own agenda. The Republic of Armenia has been and remains within  the framework of its international obligations. That is, in fact, an  attempt is being made not to give an opportunity to resolve the  issues that are on the agenda of the government of the Republic of  Armenia, "he said.  Touching upon the issue of unblocking  communications, Pashinyan stressed that this is the key point of the  trilateral statement of November 9, 2020. "The opening of regional  communications is one of the priorities of the Government of the  Republic of Armenia. And what is Azerbaijan doing? It is trying to  add components to this topic that are unacceptable for the Republic  of Armenia in terms of their content, "the head of government said.  In this vein, he pointed to the talk of the corridor. "Everyone  should know that there has never been an agreement on a corridor  through the territory of the Republic of Armenia," he assured.  Pashinyan stressed that the Republic of Armenia did not undertake  either oral or written obligations on this proposal, moreover, it  always expressed its clear position on this issue. And there can be  no question of secret agreements.

Nikol Pashinyan also stated that at the early parliamentary elections  on June 20, the country's authorities received a mandate from the  citizens of the Republic of Armenia to open an era of peaceful  development for Armenia and the region. "We are determined to follow  this path, but we must state that, unfortunately, it depends not only  on the Republic of Armenia. This is the whole problem>. In this  context, he noted the importance of joining efforts with the  international community in bringing countries that pose a threat to  peace in the region into a constructive field. "But on the other  hand, we should be as constructive as possible in order to be able to  realize the mandate received from the people, of course, in no case  at the expense of the national and state interests of the Republic of  Armenia," Pashinyan said. The head of the government stressed that  the government is facing the task of carrying out the process of  reforming the Armed Forces on a large scale. "It is difficult to  overestimate the role of the Minister of Defense here. Mr.  Karapetyan, I wish you good luck in promoting this agenda, "he  concluded.

In turn, the newly appointed Minister Arshak Karapetyan assured that  he will do everything possible to ensure peace, protect the borders  and restore the resources of the Armenian army thanks to the already  initiated investments and reforms. "We want the Armed Forces of  Armenia to be one of the most powerful armies that have their own  reputation in the region," he stressed.