Erdogan confronted Azerbaijan with fact of recognition of Northern  Cyprus 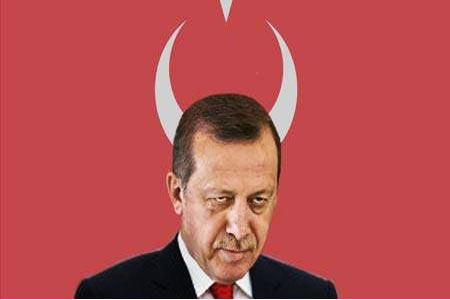 ArmInfo.Turkish President Recep Tayyip Erdogan, who is on a visit to Northern Cyprus, expressed hope that high-level visits from Azerbaijan to the self-proclaimed  Turkish Republic of Northern Cyprus (TRNC) will continue. He told the  journalist about this after the holiday prayer on the occasion of  Gurban Bayram in the Hala Sultan mosque.

Answering the question about the possibility of Azerbaijan's  recognition of the Turkish Republic of Northern Cyprus, the Turkish  leader noted that there are no doubts in this matter. "We are  constantly discussing this topic with my brother Ilham Aliyev,"  Erdogan said, quoted by APA.

We also note that yesterday Erdogan, referring to the settlement of  the Cyprus issue, noted that negotiations are possible only on the  basis of the principle of two states.

"Turkey stands for the settlement of the conflict in Cyprus on the  basis of the principle of two equal and sovereign states.  Negotiations on Cyprus are now possible only on the basis of this  principle," Erdogan told reporters before leaving for a visit to the  self-proclaimed Turkish Republic of Northern Cyprus (TRNC).

He reiterated that the establishment of high-level contacts between  the TRNC and various countries of the world, including Azerbaijan, is  the result of Ankara's efforts.

To note, Azerbaijan does not recognize the illegal entity known in  Turkey as the "Turkish Republic of Northern Cyprus" yet. However, its  Nakhchivan Autonomous Republic recognizes it in violation of UN  Security Council Resolution 541 and UN Security Council Resolution  550. Experts in Greece and Cyprus are convinced that official Baku  does not do this, fearing that in response, Athens and Nicosia will  recognize the independence of Nagorno-Karabakh. Analysts are also  convinced that if Nagorno-Karabakh ceases to exist, the Azerbaijani  government will become the second country after Turkey to officially  recognize the so-called "Turkish Republic of Northern Cyprus".   Cyprus has been de facto divided between the Greek and Turkish  communities since 1974 following an armed invasion by Turkey,  provoked by an attempt to annex the island to Greece. 37% of the  island's territory was occupied, on which the TRNC was proclaimed in  1983. Only Turkey recognized it.  Negotiations between the Greek and  Turkish communities on the reunification of Cyprus are being mediated  by the UN. They were interrupted after the failure of the next round,  which took place in the Swiss town of Crans-Montana in 2017.  New  leader of the Turkish Cypriots, Ersin Tatar, who was elected in the  elections on October 18, 2020, is in favor of a confederal system of  Cyprus, while the Greek Cypriots propose a two-zonal bi-communal  federal state.