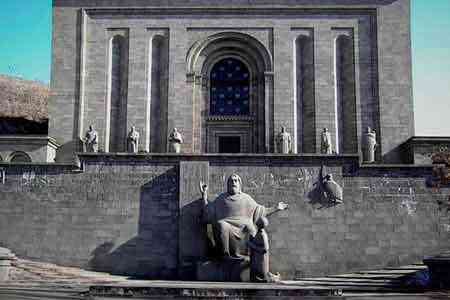 ArmInfo. A conference of French language teachers in Armenia was held in Matenadaran today.

As reported by the press service of the RA Ministry of Education, the  conference was organized by the French Embassy in Armenia in  cooperation with the RA French Language Teachers Association. The  event brought together about 100 French language teachers from  general educational institutions of the RA.  Deputy Minister of  Education, Science, Culture and Sports of the Republic of Armenia  Zhanna Andreasyan spoke about the Armenian-French relations in the  educational field, noting that joint programs are being implemented  with the French Embassy in Armenia aimed at popularizing the French  language in the country.

She also touched upon the current state policy aimed at creating new  opportunities for expanding the teaching of the French language,  improving it, as well as improving the qualifications of French  teachers.  According to her, the new state standard of general  education can significantly improve the quality of teaching foreign  languages based on competence learning.

Stating that language is the basis for the formation of thinking,  Andreasyan assured that the Ministry will do everything possible to  quickly implement qualitative changes in general education and ensure  the professional development of teachers. The event participants were  greeted by the Ambassador of France to Armenia Jonathan Lacote and  the Director of Matenadaran Vahan Ter-Ghevondyan.  During the  conference, various speeches were made that dealt with the  development of teaching the French language, new standards of  teaching the language, prospects and problems of in-depth study of  the French language, etc.