Valentina Matviyenko assessed the results of elections in Armenia 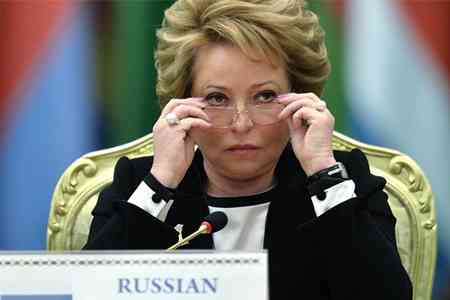 ArmInfo.The preliminary results of voting at the early parliamentary elections in Armenia  show that the political forces with which Russia has established  contacts, including on the settlement of the conflict in  Nagorno-Karabakh, won. Speaker of the Federation Council Valentina  Matviyenko stated at a press conference following the spring  parliamentary session.

Matviyenko noted that those political forces with which systemic  contacts have been established in the Russian Federation, including  on the settlement of the conflict in Nagorno-Karabakh, won. "No  violations were noticed during the elections - these are the first  conclusions," she said.

The speaker considers it extremely important that now the government  of Armenia be formed as soon as possible, and a constructive dialogue  should be established with those forces that lost the elections. "As  for inter-parliamentary cooperation, we are interested in its early  establishment. I hope that the new leadership of Armenia will be  interested in continuing foreign policy cooperation with the Russian  Federation," Matviyenko said, the <Parlamentskaya Gazeta>(  Parliamentary Newspaper) reports.

Early parliamentary elections in Armenia were held on June 20.  According to the Central Election Commission of Armenia, after  counting the votes, Nikol Pashinyan's "Civil Contract" party gained  53.92%, the "Armenia" bloc of former Armenian President Robert  Kocharian - 21.04%.

Also, the "I Have Honor" bloc, formed by the Republican Party of the  former President of Armenia Serzh Sargsyan and the Fatherland party  of former head of the National Security Service Artur Vanetsyan,  entered the parliament, gaining 5.23%.